Hey gang, Valkor here. It’s great when a film has a strong beginning. But in order for it to work, it has to keep that flow going towards the very end or else the whole experience was for naught. Take for instance “Pressed”, it almost made it to all levels of awesome, until a certain twist sent it on a downward spiral to mediocrity. Which brings us to this next film up on the TOV MediaView chopping block, 4Got10; it starts out well enough but doesn’t have the stuff to keep things interesting. Beware of spoilers. 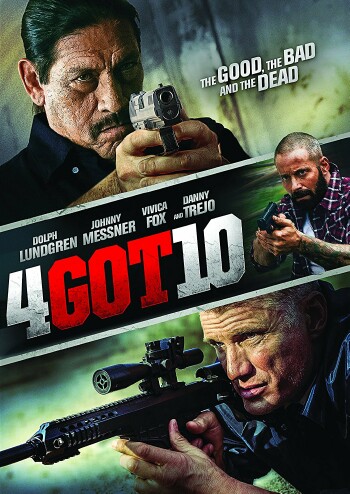 "4Got10" centers on Brian Barns aka “The Outlaw” (Johnny Messner – Arena, Kill ‘Em All), who awakens in what appears to be a junkyard out in the desert, surrounded by dead bodies and no memory of what went down or even his past. Sheriff Olson (Michael Pare – Direct Contact) and his Deputy enter the scene, to which Brian plays dead, and they not only discover the horrific sight but also a van with bags full of money. Olson is corrupt and wants to keep the money. However, the Deputy wants to turn it in, but not before Olson puts him down. This leads to a confrontation between Olson and Barns, where Olson gets his ear shot off and Barns makes his getaway with the money and the drugs.

Things get even more complicated for Barns as DEA Agent Rooker (Dolph Lundgren – Battle of the Damned, Shark Lake) is hot on his trail, as well as a drug lord named Mateo Perez (Danny Trejo – Bad Ass, Recoil). But what’s their connection to Barns and the money? Well for Rooker, he wants Barns so he can get his hand on the money and make a break with an informant named Christine (Natassia Malthe), whom we later learn may or may not be Barn's girlfriend (She's not). Mateo wants the money as well… because it’s his money, but he also wants revenge for the death of his son, who was the deputy killed by Sheriff Olson. Olson is also on the case because he not only wants the money back, but he wants to pin the death of his deputy on Mateo or Barns, so long as the heat is off of him. There’s also a lawyer and his girlfriend (Christine), where all parties will converge and settle their transgressions once and for all, save for Rooker, who will meet a rather anticlimactic end later on. If it sounds messy, believe me, it is. But I don’t want to jump the gun before the breakdown.

Vivica Fox (Solid State) also makes an appearance in “4Got10”, but her character is of no use to the film. Other than that, given the cast that went along with this film, I was expecting to be blown away. But in the end, I was left rather limp, and I’ll tell you why in the TOV Breakdown.

"4Got10" isn’t a terrible film and it has a few things going for it that may justify sitting through it. For starters, the story of an amnesiac trying to piece together his life to figure out what exactly what got him to that point is interesting enough. Toss in a cast of characters who are, in some form or another, actively involved with Barns ups the ante. The acting is OK, with Messner and Lundgren as the only real standouts of this film. And the action scenes have more misses than hits, but at least they’re used in such a way as to snap you back into the film when things start to drag. However, once you get past the first 20 minutes that's when things start to fall apart.

I don’t even know where to begin to detail all that’s wrong with "4Got10" because there’s just so much. But to keep things to a minimal, let’s start with the story, which makes sense in the beginning, but then it goes all over the place midway, then it tries to clean itself up by the end, but it doesn't do a decent job of it. The biggest problem is that there are too many characters the film attempts to place focus. Hell, by the end of the film, Vivica Fox’s character is all but forgotten and Lundgren’s character is simply taken out with no real standoff – and he should have gotten a final fight rather than a straight up bullet to the head. Maybe the film would have worked better as a flashback? You know, where it begins how it ends and then flashes back to like 24 hours earlier? But ultimately the film is just messy as the story is all over the place and when really a cleaner script and tighter editing would have made for an improved viewing experience.

Mateo and Olson legit have a “Naked Gun” style shootout, where they’re blasting each other as they’re sitting right in front of one another.

“4Got10” is available now and while it might have a strong beginning, but ultimately it winds up being a complete waste of time. If you happen upon it in the cheap bin or late night cable channel surfing, maybe give it a viewing. But I’d suggest passing it up at any and every opportunity. So out of TOV 5 stars, I’m giving "4Got10" a 2.

4Got10 DVD Review
The Good: Opening, some acting and actiona
The Bad: A mess of a film
The Ugly: N/A
TOV 5 star rating: 2 stars