Hey folks, Valkor here. When it comes to films, usually a series' third outing isn't always a pleasant one; Spider-man 3 comes to mind, a lot of people hated Matrix Revolutions, and what of Return of the Jedi? I actually enjoyed that one. Well the folks at Warner Home have delivered into the Val-cave the third chapter of stoner duo Harold and Kumar titled "A Very Harold and Kumar 3D Christmas" Blu-Ray Combo Pack. Light em up! Puff, puff, give! Oh and some spoilers ahead, so beware.

The boys are back and this round their tearin up the holidays the only way they know how. It's been 3 years since Harold (John Cho) and Kumar's (Kal Penn) last adventure in and out of Guantanamo Bay. And since then the two have grown apart – Harold has a great job, with the girl of his dream's Maria (Paula Garces), and they even have an awesome home together. While Kumar is still living in the same apartment, still tokin up, with no job and he got a little surprise of his own – girlfriend Vanessa (Daneel Ackles) is pregnant! 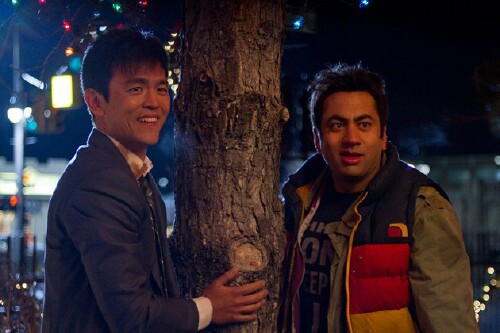 So how do these formerly close friends, who've grown so far apart, come together again? Well, Maria's family is visiting for the holidays and her father (played by Danny Trejo), has brought along a Christmas tree that he's been growing for 8 years. Christmas is very important to him and Harold has really done up the place to show that it's equally important to him. The family wants to go to midnight mass, but the father wants to stay and decorate the tree. Harold volunteers to decorate the tree while the family goes to church. Meanwhile, over at Kumar's, a mysterious box arrives for Harold and Kumar decides to bring it to him. Inside the box is a joint that Kumar instantly lights up, only to have it tossed away by Harold because he no longer smokes. Oddly enough the lit joint flies out the window and back into another window, lands on Maria dad's tree, which then goes up in flames.

Now the duo has to find another tree before Maria and family return from mass. And believe me this adventure in tree hunting won't go over well. They'll crash a teen party, be hunted by mobsters, go Claymation, get a baby high, shoot Santa Claus in the face, and welcome the return of NPH (Neil Patrick Harris)... who died in the 2nd film, is back, and just as insane as ever.

And kudos to the writers for being geniuses in writing NPH into this third outing, whose return makes perfect sense and fits the role of the character. His character isn't the show stealer as the trailer would lead you to believe, but when it's time for his scene… prepare for some serious laughs. Oh and for a gay man, NPH plays it straight rather well.

The single disc BD is a combo, so not only do you get the blu-ray, but also the DVD, and the ultraviolet digital copy. The BD contains two version of the film – the theatrical and also the extended cut, which I feel doesn't add all that much. Extras include deleted scenes, "Bringing Harold & Kumar Claymation to Life", and "Through the Haze with Tom Lennon".

So after checking out both version of the film and swimming through all the extras, it's time to put Harold and Kumar under the TOV magnifying glass… again, in the TOV Breakdown.

Harold and Kumar are back and they bring the funny just as fierce by keeping in line with all the wackiness of the previous films and introducing some new characters. The story is very christmasy, even though there's heavy drug use; I feel it's an instance holiday classic. And great job adding classic christmas tunes to the mix, which I didn't expect at all, however it doesn't feel out of place. As far as the acting goes, what I said about John Cho and Kal Penn in my Guantanamo Bay review, still applies here as the characters the two play hasn't changed from film to film. Sure their older, but their roles have been nothing but consistent. NPH deserves a nod for his role, which was hilarious (and not as dark as the second film), but instant showstopper of this round goes to the Coss triplets – Hannah, Chloe, and Ashley who play stoner baby Caren. And her "trip" doesn't stop with weed I'm afraid. There are some nice cameo appearances such as Danny Trejo, Patton Oswalt, RZA, Tom Lennon, Da'Vone McDonald, and Richard Reihle as jolly St. Nick just to name a few. Overall, A Very Harold and Kumar 3D Christmas is a definite winner in my book! 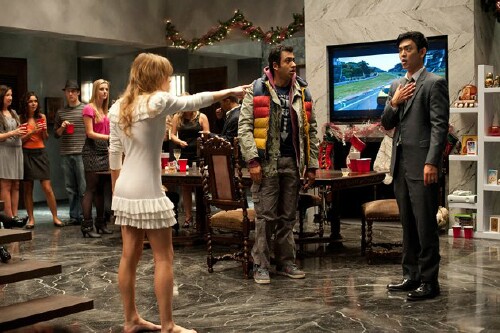 Tom Lennon's "Through the Haze" doesn't play continuously. I know it's a nitpick, but having to play each bit separately was rather annoying. 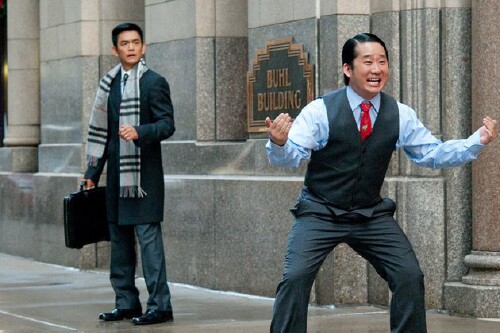 Did I see a joke ripped from Family Guy? Or was the Anne Frank eating a bag of chips while hiding from Nazis a bit taken from somewhere else?

A Very Harold & Kumar 3D Christmas Blu-Ray Combo Pack is available now and if you're a fan of the first two films then you'll definitely want to snatch this one up because it's loaded with laughs and holiday cheer. So out of TOV 5 stars, I'm giving this third film a 4.5 and it's been Valkor Viewed, TOV Approved. 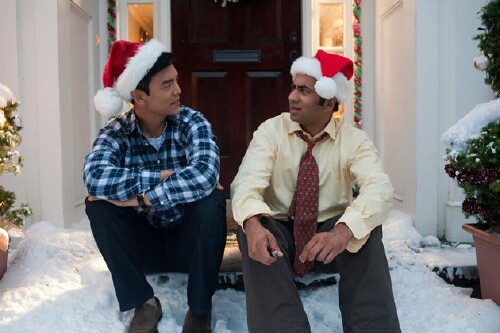