Hey gang, Valkor here. After the dismal showing of "Batman v Superman" and "Suicide Squad" (at least in my opinion), I had little hope that the DCEU could be salvaged. That was until Wonder Woman came along and showed me that DC and Warner Bros. could scrape together awesome. The trend continues as the DCEU has scored another hit, this time with their highly anticipated ensemble film - Justice League. And it is everything a superhero movie should be and so much more! Be wary of a few spoilers ahead.

Justice League continues after the events of BvS as well as Wonder Woman, as we’re sort of dealing with the aftermath of a world without Superman (Henry Cavill – Man of Steel). A new threat has emerged that threatens the planet in the form of Steppenwolf (Ciaran Hinds), who looks to retrieve the three motherboxes hidden on earth; when combined, they literally make things “hell on earth”. If you recall in BvS, Bruce Wayne (Ben Affleck) (Ben Affleck) had a dream where he witnessed the arrival of the parademons. And now that dream has come to life because right at the jump of JL, Batman fends against one of the parademons. By the end of BvS, Bruce was able to unlock a file that showed him the existence of other humans with super abilities. Now, it’s up to Bats and Diana Prince aka Wonder Woman (Gal Gadot) to make use of that information and gather up the new heroes consisting of The Flash (Ezra Miller), Aquaman (Jason Momoa), and Cyborg (Ray Fisher) to save the earth from this most powerful foe. Things are a bit rocky at first, save for The Flash, who joins up without any hesitation. But getting the other two required some work. Thankfully, everyone realizes the threat and ultimately come together to take on Steppenwolf and his parademons invasion from taking over the planet. Cyborg plays a key role in the film, as he’s the one who has a better understanding of the boxes. And it’s his knowledge of the boxes that will see the return of a hero lost – Superman.

And while there’s plenty to see (and hear) during the Justice League film, you’ll want to sit through the end credits for even more treats. The first being the race between Superman and The Flash; we don’t get to see the end result, but it’s still fun to watch. And the next may lead into the next JL film… If it ever happens. And I hope it does!

Long story short, “Justice League” was the most fun I’ve had in quite some time with a DCEU film. Sure, Wonder Woman was great and I’ll still rank it highest amongst the DC films. But JL was way more entertaining filled with a buttload of action and a ton more laughs than I would have expected. The story was very simple but large enough of a tale that it warranted these great heroes banding together to take on this grand invasion. And we don’t spend too much time with much of the character’s origins, mainly Cyborg, Aquaman, and The Flash who look to get their own films in the future. However, JL does a fairly decent job giving us a quick glimpse into each of their back stories. However, I would have liked more with Aquaman, seeing as how his film is next in line to be released. But I’m OK with everything else. The action was on point and I’ll admit to cheering during some scenes; one of my favorite scenes is when the Amazons faced off against Steppenwolf, which if this film were R-rated, it would have been pretty gruesome. But you can still see this dude wasn’t holding back. Of course, there’s the final battle where the Justice League finally come together to take on Steppenwolf who has achieved his goal of obtaining all three boxes. That, in and of itself, was quite the rush! Next up, there was plenty of eye and ear candy to look out for, mainly the original theme music for Batman and Superman, the Green Lanterns (during a flashback scene), The Flash falling over his own feet, and was that a brief nod at Injustice when Wonder Woman fought Steppenwolf on that bridge? It definitely seemed that way. Finally, I felt the acting was on point! I can’t say that I have a favorite performance, but I’m not about to shower anyone with hate. I mean it’s impossible to find a bad egg in the bunch amidst all that awesomeness! In the end, I went into Justice League with the lowest of expectations, but I walked away completely satisfied; it’s an engaging and entertaining film that will hold you from start to finish. And I can’t wait to see it again! 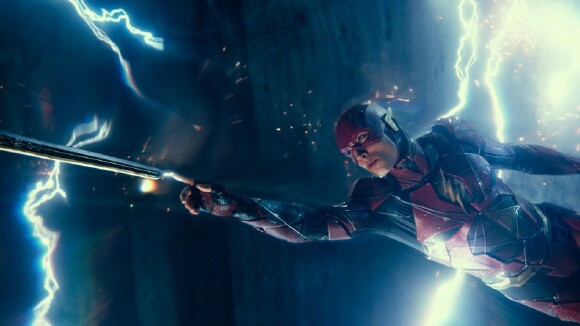 Justice League is still making the theatrical rounds; and if you haven’t seen it yet or you might have been put off by some critic reviews, then do yourself a favor – go see this film! It’s a quick watch, easy to follow, with loads of action and fun that doesn’t disappoint. Out of TOV 5 stars, I’m giving Justice League a 4.5.