Kill for Me DVD Review

Hey gang, Valkor here. And I'm back to the place where I love to rest my hat, in the hallowed halls of MediaView, where I sit back, relax, pop the top of a brew (or whatever drink I'm able to scavenge) and take a look at what's new in the film world. This round "Kill for Me" DVD gets the TOV treatment. And while it was sluggish to start, it ended up better than expected. Some spoilers ahead!

"Kill for Me" centers on Amanda (Katie Cassidy - Taken), who from the start is dealing with the loss of her friend gone missing Natalie (Leah Gibson). She's living in a pretty big house along with friend Zoe (Shannon Chan-Kent) and since Natalie was originally living with them but is now missing, Zoe rents the room out to newfriend Hailey (Tracy Spiridakos – The Boy She Met Online). Things are a bit rocky at first but later the two girls – Hailey and Amanda, learn they have something in common; they both are involved in abusive relationships. With Amanda, it's her ex-boyfriend Cameron (Torrance Coombs), who Amanda believes may have had something to do with Natalie going missing. Cameron keeps popping up to "show his affection", the first round nothing, but the second round, things get a little aggressive. Thankfully Hailey shows up to save the day. The final round Cameron brings a gun to the party and when Hailey shows up again, this time she takes an axe to his brain. The two dispose of the body along with Cameron's bike and Hailey attempts to pin the whole thing on her dad Garret (Donal Logue).

Yup, this brings us to Garret and for that we have to go back a ways. When we first meet him, there's obvious tension between him and Hailey, but you're unsure just how bad the relationship is. The first time the two girls confront Cameron, they form a sexual bond. The second time, with the killing, we see mad bruises on Hailey's back. How'd she get the bruises? Fast-forward after the killing of Cameron, now Hailey wants some payback as well. We learn that Garret was crazy abusive towards her mom and when she passed on, he moved on to Hailey. Now Hailey wants the demon to go away and she needs Amanda help. The only thing is Amanda isn't up for the task, so Hailey brings along a little insurance in the form of friend-zoned Mark (Adam DiMarco), whom she holds hostage until the deed is done.

So does Amanda go through with it? Is Hailey more of psycho than torn up inside? And where the hell was Zoe through all this? Also pic below, that's when I truly started paying attention to the film.

I've been sitting on Kill for Me for some time and now that I've seen it, I can't believe I almost let this one slip past me. The story is very well written, building up a lot of tension and tying all aspects of the story together to one climatic ending. The pacing was sluggish at first, but after watching it a second time I could see how it works to establish the relationship between Hailey and Amanda, though I think it could have been handled better (more on that in the next section). And then, just when you think you've got this film all figured out, it goes and flips the script on you with a neat little twist. It's not an 'Oh shit!" moment, but it serves its purpose well. Finally the acting truly compliment the film, with everyone bringing their A game to the table. Tracy Spiridakos… I reluctantly enjoyed your performance in "The Boy She Met Online", but I was completely blown away by your psycho/abused Hailey; she's calculating and unremorseful, yet affectionate and caring. Kudos also goes out to Donal Logue, who played one crafty mofo whom I enjoyed every moment your character was on-screen (no homo). PerfectView goes out to Katie Cassidy, who flat out takes the award after that scene where she has to seduce Garret. So damn gorgeous it hurts! In the end, Kill for Me definitely ranks as one of favs in 2013.

Just a few nitpicks and the first being the Zoe character. I think it would have saved on time had she not been included since her character plays no role or affects the plot in anyway. It also would have been nice to maybe get things going between Amanda and Hailey from the start, maybe a rub here or a pat on the cheeks there. They just sort of go at it soon after they chase away Cameron. And finally the film is kinda predictable, one scene in particular is when Amanda "kills" Garret. It'll be obvious when you see it, but definitely stay with it because it's worth seeing it through to the end.

My boner when that make out scene didn't progress any further into nude territory. Don't worry buddy, we'll get em next time. 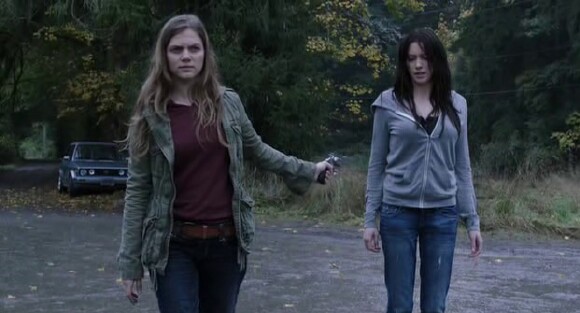 Kill for Me, while I was considering not watching you after the first 15 minutes, I'm really glad I stuck with it and I was rewarded with a thriller that's well written, well acted and full of suspense plus, it isn't short on eye-candy. I highly reccomend checking this out. And out of TOV 5 stars, Kill for Me gets a well deserved 4.