Hey gang, Valkor here. After swimming through all this holiday “cheer” (music, films, treats, etc), it’s definitely time for a change of pace; and there’s no better way to shake up the Christmas spirit than with a little horror action. Enter "No Tell Motel" DVD, directed by Brett Donowho. It was certainly a film to bring me down from my holiday high… but not in the way I would have liked.

No Tell Motel centers on five friends out on a little journey in an RV, each with the personality typical of a film of this nature; you have the jock/drug abuser Kyle (Andrew MacFarlane), sweet and quiet Megan (Chalie Howes), sexy slut Rachel (Chelsey Reist), edgy as fuck Corey (Angel McCord), and the jokester Spencer (Johnny Hawkes). While making their way along the highway, Kyle gets a little heated (because Spencer made him drop his drugs in a grungy toilet – yea he picked them up!), which causes the RV to tip over. They stop near an abandoned motel, where they decide to camp for the night until dawn when the nearest gas station will reopen. After Megan interrupts Rachel and Spencer’s sexual shenanigans, she and Rachel head outside where Megan tells Rachel she’s preggers with Kyle’s kid. After the discussion, she notices a little girl on a swing. She follows the girl out onto the highway where she’s suddenly hit by an oncoming car and dies. 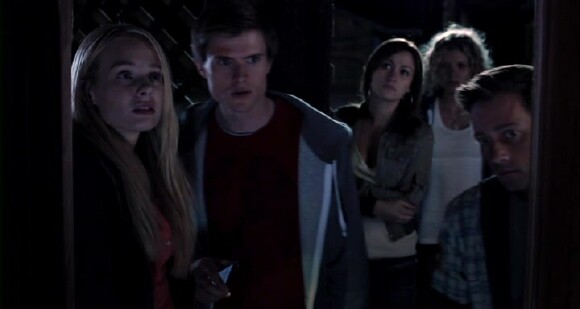 Pause. You’ll learn from this scene that the little girl isn’t real – in fact she’s a ghost who is reenacting a moment from her past (which is the film’s opening) when she’s playing outside by herself, wanders out onto the road and hit by a car.

Return. After Rachel’s event, other strange occurrences begin happening – mainly strange people moving about and the mysterious little girl popping in and out. What’s actually happening are events being replayed by the motel’s former owners Mary (Stephanie Van Dyck) and Grigor (James Tyce) Horak, who went into a psychological downward spiral after the death of their daughter Angela (Rileigh Chalmers). And the foursome are now caught up in the mess. They don’t actually interact with the Horaks, save for their daughter, so who is actually pulling the strings and what's the reason for it all? Do you even care?

If there’s one thing I could buy into with "No Tell Motel", is the story of the Horaks; if you were to pull their story from the film, it would be pretty chilling and very twisted. After that…

To answer the previous question: no, no you won’t care about this film. No Tell Motel is an uneventful, confusing mess of a horror. The story tries its best to stay on track but ends up wandering in all sorts of directions with characters who do things that make no sense. Case in point, Corey falls through a weakened hole in the floor into a basement, lands with a piece of wood in her leg and then proceeds to try and climb out with a makeshift ladder. Bitch, you’re in a basement! Go look for some stairs (yes there are stairs). Next is Rachel’s death, which doesn’t really seem to affect anyone. They just toss her to the side and she’s never seen again. Mind you the guy who hit her, who was obviously drunk at the time, is taken into the motel. Next Spencer makes a play for Megan (because he has always loved her) and Kyle bites it after overdosing on any and every drug he can get his hands on. I don't believe anyone actually dies directly by the hands of either the little ghost girl or her parents. It's a shame really. The film has a bit of twist ending but by the time you hit the reveal, you might be bored out your mind as nothing scary or suspenseful ever happens. FYI everyone gets it save for Spencer; we’re not exactly sure if he ever makes it out of the motel and I’ll assume he’ll be just fine. Maybe. I dunno!

Kyle injecting a shit ton of drugs until he dies foaming at the mouth. And then given mouth-to-mouth.

No Tell Motel is available now and if you found this film channel surfing then definitely surf right on past it. Trust me there’s nothing to see here save for a boring story with wooden characters and a plot twist that by the time you reach it, you’ll probably already have checked out. So, out of TOV 5 stars, No Tell Motel gets a 1.

No Tell Motel DVD Review
The Good: The Horak's story
The Bad: Everything else
The Ugly: I'd let Kyle die
TOV 5 star rating: 1 stars