Hey gang, Valkor here. I’m gonna reflect a bit on a past film that has a lot to do with a film I’m about to review; Solid State was a film, that to me personally, showed some potential. But as the film progressed, it seemed to have lost its way amid a lot of dumb mistakes that could have easily been corrected, if someone was paying attention to what was actually going on. True it seemed like a big story, but in the end it was weak, lifeless and a laugh riot of badness. That brings me to this next review – RZ-9, a film that started out kinda cool but ended so… blah. Some spoilers.

RZ-9 kicks off by telling us that domestic terrorism is at an all time high in the U.S. And it has gotten so bad that the government kicked off a program consisting of drones and elite soldiers to track down and handle such situations. Unfortunately in one instance, the team couldn’t stave off this particular threat that all but wiped out the city of Los Angeles.

Skip ahead a few years later, one of the members of that special team, Patterson Endcott (Joshua Marble) - a drone operator, who was also around for the LA incident, is suddenly under investigation because of his religious affiliations, which have been banned by the government and he may or may not be compromised. His first reaction is to make a break, but not before setting off a virus that would disable his work computers. He then heads back home to get his “under house arrest” sister Sam (Morgan Obenreder). And amidst a heated pursuit and near capture, they’re able to escape thanks to a handful of resistance fighters who hope to lead them to escape into Canada, where the U.S. drone program isn't allowed. Unfortunately Sam neglected to tell the group that whilst under house arrest, she has a tracking bracelet on her ankle. And while it’s capable of being removed, it might be too late as the soldiers known as “Erasers”, along with a couple of drones are seemingly hot on their tail. And though Sam might not be high on their wanted scale, Patterson is and these dudes are out for blood.

OK, I kinda made that sound a lot cooler than it really is and I’ll get to why it isn’t that cool in the breakdown. But I will say one thing though; I kinda compared this film to Solid State, which was horrendous, but to get this out of the way, RZ-9 didn’t make as many missteps as the aforementioned film, but it does quite a bit that it won’t be high on anyone’s “must see” list.

RZ-9 appears to be an ambitious project that utilizes a nice chunk of CGI and digital effects to give it that big, actiony feel. And in some areas it does well, especially in those action scenes, which are pretty awesome. And from such a small budget, the film pulls off some pretty cool effects, especially with the drones. I wish there were more throughout; and believe me the film could have used some. After that there isn’t much else. So we move on to…

First up, the story for RZ-9 isn’t laughably bad, but it’s still pretty bad. For one thing, it does a great job of setting things up with the nuke attack on L.A., but after it tosses Patterson at us, making him the primary focus because… reasons? There’s no setup other than him and his sister going at it because she likes to stay out late. I mean the dude is being investigated for his religious belief and he wouldn't have known but for some reason reason he decided to look himself up; prior to that we’re given no knowledge that he's of any importance. The film actually sets up his commander to take center stage as he’s the one who lost his wife and daughter in the L.A. attack; he’s the one we’re emotionally connected to (a little), so why bother with Patterson at all? I guess that’s how the story goes. Once the group is on the run, the film drags and I mean it seriously drags to the point that I wound up looking through Magic the Gathering cards because I could care less of all this middle fluff. I perked up when Patterson died (Spoiler – you won’t care), fell off again and perked back up when it’s just the resistance leader and Sam vs RZ-9, one of the Erasers and one of the best of the bunch mind you. It was an interesting standoff that ended… not how I would have expected. And I wasn’t pleased by it either. Next, who is supposed to be the hero of this tale? Is it Patterson, who somehow learns the government is about to come down on him? Is it his sister, who was thrown into the mix? Is it the resistance leader, who rescues the duo and helps Sam reach her destination, putting his own life on the line to do so? Or is it the ruthless hunter RZ-9, who ultimately lets Sam go because he grows a conscience all of a sudden? I’m not really sure, but what I do know is that this film needed less narrative and way more shit being blown up – and I mean a whole lot of shit! And ninjas!! Yea, ninjas!

RZ-9 is available now and while it’s not the action film I would have liked it to be, it does have a tiny bit of cool that makes it not unwatchable, but you’ll probably give it a pass should you either come across it on Netflix or in the bargain bin at Walmart... and I'm pretty sure you'd have to dig pretty deep to find it. But if you do decide to watch it, bring a pillow because this one will probably put you down. And out of TOV 5 stars, I’m giving RZ-9 a 1.5. 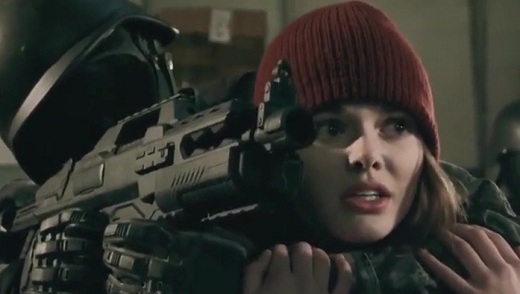 RZ-9 DVD Review
The Good: Cool effects, some action
The Bad: the story, who is the hero, just blaaaah
The Ugly: N/A
TOV 5 star rating: 1.5 stars