Epic-1 your friendly neighborhood reporter is here!!! So this time I am here with Stan Helsing a horror spoof featuring Steve Howey as Stan Helsing a person who works for Schlockbuster video store. He's told to deliver movies to the owner's mother's house on the night of Halloween. And Stan is not alone; he has with him his ex-girlfriend Nadine (Diora Baird) who dresses like a native American, his best friend Teddy (Kenan Thompson) who is dressed like a super hero, and Teddy's date for the night Mia (Desi Lydic) who is a dumb blonde, ex stripper turned masseuse, dressed like a cheerleader (at first). So they go on their adventure and during their trip they hit a dog, which the owner vows to get them. They also pick up a hitch hiker that turns out to be a convict, that they throw out of their van, and oh yea did I mention that they have monster movie legends trying to kill them as well. That's right we have a hip hop looking Freddy Krueger whose name is Fweddy (Ben Cotton), a human dart board Pinhead named Needlehead (Charles Zuckerman), a human doll who is a big pervert Chucky named Lucky (Jeff Gulka) a Jewish killer Michael Myers named Michael Criers (Lee Tichon), a truck driving leaf blowing maniac Leatherface named Pleatherface (Twan Holliday), and the hockey mask and suit wearing Jason named Mason (Ken Kirzinger). Now the situations the heroes get into are hilarious and the scenarios are funny as hell. Did I mention that we also see Leslie Nielsen as Kay, a waitress in the town that they get stuck in? Now the ending of this movie is hilarious as the heroes go up against the monsters in a karaoke battle, where the monsters do a parody of the Village People's song YMCA called STAN. The monsters lose and then Stan Helsing must embrace his heritage of the long last family member of Abraham Van Helsing and destroy the monsters.

The movie in whole is hilarious reminds me of the first Scary Movie. The hilarious Fweddy is great with his Flava Flav clock and Charlie Brown shirt. The constant dress change of Mia just gets hotter and hotter from cheerleader, to school girl, to hot nurse. Did I mention also we have vampire angel strippers in the movie as well (BONUS!!!) Kenan is funny as hell and I haven't laughed this hard with him since back in the day. 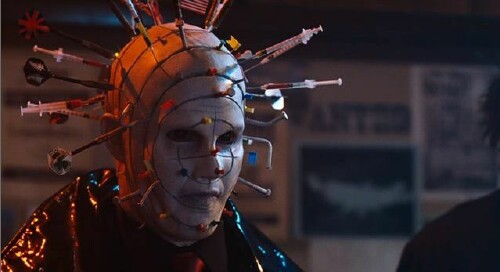 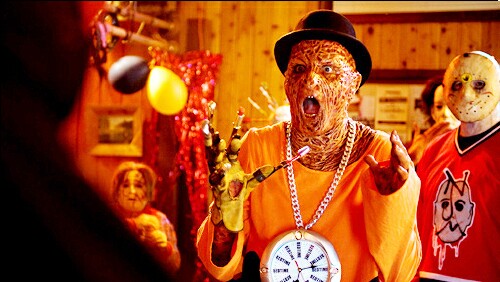 So in conclusion, Stan Helsing is funny as hell and will have you laughing from beginning to end. I give Stan Helsing 4 out of 5 stars and it has been Epic-1 tested and TOV approved!!!