Hey folks, Valkor here. Other than The Expendables, this will be the first time I'm actually reviewing a film centered on WWE star Stone Cold Steve Austin. I know he's made many a films; Epic had the pleasure of checking out Damage, which he gives it high praise. But as for me, well… it's not that I had my doubts about the man, again I've never really watched his film. But any doubts I did have were pushed aside, because although Stone Cold may not be the greatest actor around, he's certainly earned his action chops and proves it in "Tactical Force". Finally some bad assery on TOV! 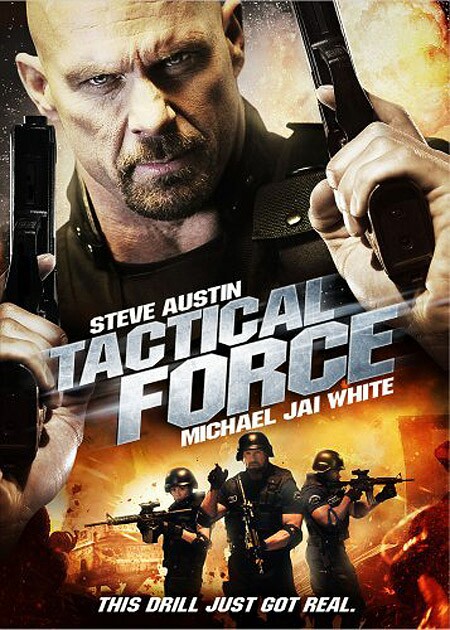 Tactical Force centers on a S.W.A.T. team that plays by their own rules - you have their leader Tate (Steve Austin), Hunt (Michael Jai White), Blanco (Steve Bacic), and Jannard (Lexa Doig). The group was able to foil a robbery at a convenience store using tactics that were… shall we say "not by the book" (shooting a guy with a BB gun, hitting the store owner with a steak to save his life, and beating down a felon WWE style… just because). Well their captain isn't too happy with that and sends the group back to basic training, where they are given access to an empty warehouse to hone their skills.

Oh but here's where things go sour; before the squad arrives, Russian mobster Demtrius (Michael Shanks) and his side piece Ilya (Candace Elaine) drag stoolie Kenny (Michael Eklund) to the same warehouse to retrieve "an item". What that item is, we never find out, but it's damn important because an Italian rival gang, made up of Lampone (Adrian Holmes) and his right hand man Storato (Darren Shahlavi) also want it. Actually they want it back since Kenny took it from them. 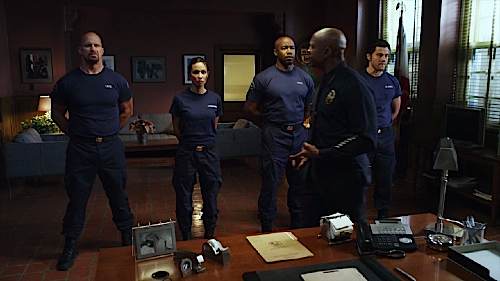 The squad shows up to get on with their training and the criminals run and hide. However they're none to silent, making quite the commotion and alerting the cops of their presence. Blanco goes to investigate and gets taken out. It's then that the crooks learn that the cops are rockin blanks, while they have the real deal.

So you have three cops trapped in a warehouse with no real ammo, with a bunch of mobsters (who have back up on the way mind you), who want this "thing" hidden somewhere inside. Oh you better believe shits about to hit the fan. But I won't go any further than that, leaving the rest for you guys to enjoy. With that out of the way, let's strike hard with the TOV Breakdown.

You know what? I really enjoyed Tactical Force. I guess it's because I went in with not the greatest of expectations, though having Michael Jai White in the film, really piqued my interest; I can't hate on the brotha, he's good. However as an action film, Tactical Force is pretty bad ass. Loads of action, shoot outs, and beat downs to satisfy the need to watch a bunch of bad asses kick a lot of ass. The acting isn't the best, but this isn't the type of film you'd wanna care about the acting – just sit back, relax and enjoy. Hell the film even had some jokes, like watching a guy get hit in the head with a steak who's not even a criminal? Or watching Kenny Porky Pig his way out of every situation? Shit's funny. Not hilarious, but funny nonetheless. PerfectView nod goes to Lexa Doig, who if only she'd gotten even a little naked, would have put this film over the top. Other than that, this is a straight forward actioner with some serious balls.

Ok what's with "that thing"? Really guys? You went that route? Ya couldn't just let it be drugs or diamonds or money, no it has to be "that thing"? I can forgive such a misstep, but come on! After the film is done and finished, who's gonna wonder what "that thing" was? Honestly, if you had made "that thing", SOMETHING, it wouldn't change the dynamics of the film; it'd still be bad ass. Oh and Lexa doesn't get to do much, though she talks a good game. Sadly her character gets beatdown by a dude who could easily pass for Colossus from X-Men. Hey, if all she does is get beat up and stand around, she should have at least flashed a titty. I'm just sayin titty would have made this awesome movie 10 times better.

Adrian Holmes plays a black Italian – not a henchman or thug, an Italian from Rome. Yea surprised me too.

If you're looking for a fun flick with loads of action and a few chuckles, then definitely make your next video purchase or rental Tactical Force. Oh and check your brain at the door, trust me you won't be needing it. And out of TOV 5 stars, I'm giving Tactical Force a 3.5 and it's been Valkor Viewed, TOV Approved!