Hey gang, Valkor here. Now I’ve reviewed plenty of films for TOV – some have made the grade and others literally got tossed (or deleted); and then there were films that never made the cut to be reviewed at all simply because they were that bad! It was either the film was truly boring or it didn't get to the point fast enough that I simply give up on it. The next film on tap, The Conduit, fits along those lines of films that I would have given up on midway through. However, I stuck it out and walked away with a so-so experience. Heavy spoilers ahead.

“The Conduit” focuses on Eddie (Wes Martinez), who is recently divorced and just inherited the home of his aunt, who raised him as a child. A slight pause, the film opens up with a young Eddie, who awoke to the sounds of his parents arguing, his sister getting in the middle and shots being fired. Later we learn that Eddie took two slugs to the chest, but survived. As an adult, on top of his past, he’s dealing with his present situation, what with the divorce and all, so he attempts to kill himself. Thankfully he’s saved by his best friend Mark (Chris Cox). And from there he enters group therapy to try and resolve his problems.

It’s during his therapy session that he meets Amy (Monica Engesser); she and Eddie hit it off almost immediately, to the point that she invites him over to her place. But Eddie has a fear of the dark and Amy lives in an abandoned building with no running electricity. So, of course, he brings her back to his place where they proceed to “get it on”. Things get shaky for Eddie when he awakens to find Amy overdosed in his bathroom. And rather than send her off to a hospital or rehab or somewhere not his home, he decides to let her stay and help her get clean. It’s a rough few days, but eventually, they make it over that hurdle. But that’s when things start to get really weird.

Forget Eddie’s dreams, which put him in a state of “sleep paralysis”; that could be attributed to his past with his mom and his fear of the dark. The weirdness truly kicks off when Eddie wakes up to find he and Amy covered in blood that doesn’t belong to either one of them. Now prior to the blood session, Eddie ran into this guy named Gabriel (Mike Watkiss), who asks if Amy is still on the drugs or if they’ve been intimate. Things get heated between the two, with Eddie storming off. Eddie questions Amy about it, but she doesn’t answer and the subject is dropped. After the blood, Eddie discovers his neighbor's dog dead in his yard. So were they covered in the dog's blood or was it something... or someone else?

As it turns out Gabriel was legit about Amy, as more strange occurrences start popping up to the point where the cops are involved and a little girl has gone missing. And what does it have to do with Eddie and how is it all linked to him? Well, Gabriel explains that Amy is a conduit to a demon world and she’s been looking for someone like Eddie (damaged goods) to pass along her “gift”. And with a final confrontation between Eddie, Amy, Gabriel and a couple of cops… she ultimately succeeded. 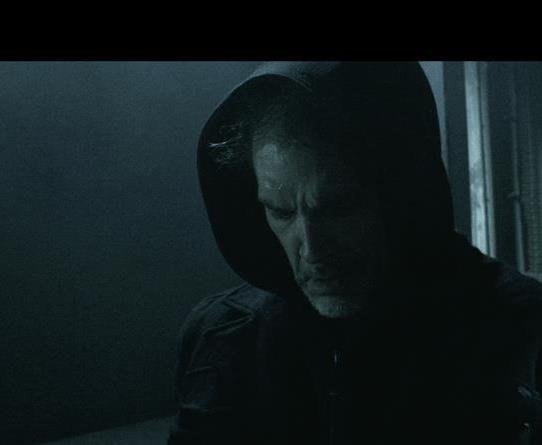 The Conduit’s runtime is approximately 102 minutes. So you if you’ve made it through my synopsis of the film and decide you still want to watch it, let it be known that there’s still way more film that I didn’t touch on. Is “The Conduit” worth going forward?

The Conduit is a fairly decent horror and that’s pretty much what kept me rooted to the film for the duration of its runtime, which was lengthy; the story is a bit all over the place and with a few edits here and there it could have been a lot cleaner. However, the main plot of Eddie versus this demon, with the origin of it all being somewhat drawn from his past, makes a whole lot of sense, even if it does get brought down by the pacing (more on that in the next section). The horror aspect is pretty cool as much of the film takes place in the dark, with lots of creepy imagery in the backdrops in the form of demonic Amy. However, there were a few jump scares though the film could use a few more sprinkled around. The acting is OK all-around, but my favorite of the bunch is the one guy who needed more screen time – Mike Watkiss as Gabriel. He plays the fallen preacher who wants to help Amy, but in doing so it might have cost him his life (we don’t know exactly if he died at the end… but I think he did). Regardless Mike had a strong onscreen presence and it was a treat to watch him in action. Overall, The Conduit is a fairly decent horror flick that I’m cool with having watched to the end.

I said 'The Conduit" was “fairly decent” and I stand by that statement. And I believe a lot could have been done to make this film a way more enjoyable experience. For one, cutting down on the runtime – 102 minutes seems way too long and it feels that way too because of the poor pacing. But there’s a lot of extras that could have been cut that would even things out or at least given more time to deserving characters. For instance, we deal with Eddie and his mom issues of his past; I get the importance that it plays in his current situation, but it didn’t need to be focused as much, because through most of the film I thought it was the ghost of his mom we’d be dealing with not a demon from another realm. However, once we get past the 50-minute mark, the mom gets tossed to the back burner. So we could have moved past that aspect of his life real quick and got into the main event a bit sooner. Back to the pacing, yeah it’s pretty bad, with not much build up towards anything truly “eventful”. The film has its scary moments but throughout my time with "The Conduit", all I really wanted was for it to get to the point. Seriously, it needed to do that with the quickness!

The Conduit is available now on digital video such as iTunes, Amazon Instant, Google Play and more. And while I have my negatives towards the film, ultimately I found that there are still some aspects of the film that make for a creepy good time. And out of TOV 5 stars, I’m giving “The Conduit” 2.5 stars.

The Conduit Movie Review
The Good: Decent horror, some scares
The Bad: the pacing, could have been edited more
The Ugly: N/A
TOV 5 star rating: 2.5 stars