Hey folks, Valkor here. I'm the biggest fan of Broken Lizard films with the first being "Super Troopers". Their shit is insanely funny right from the door and it doesn't stop till the very end. Not to be forgotten but Club Dread, Dukes of Hazzard, and my all time favorite "Beerfest" also rates high on my comedic scale. Well today Broken Lizard has a straight to DVD release (don't understand why) called "The Slammin Salmon" and I'll be damned, it puts Beerfest to shame, and surpasses it as being one of the funniest films in their roster and the funniest film I've seen this year. 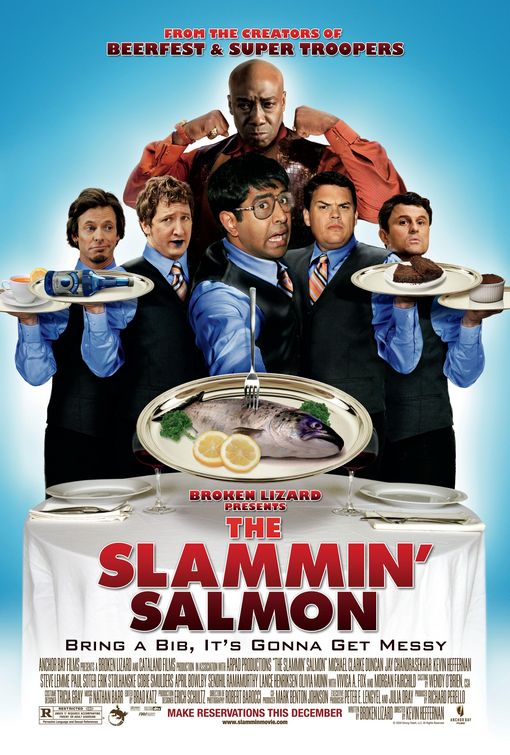 The Story of The Slammin Salmon is all about a restaurant owned by former heavyweight champ Cleon Salmon (Michael Clarke Duncan). One night, Cleon approaches his current manager Rich (Kevin Heffernan) that he's lost a bet with a Japanese yakuza type. So Cleon needs to pay the Yakuza guy 20 grand or else he'll lose the restaurant and if he loses the restaurant Rich is gonna get his ass kicked unless Rich can find a way to raise the money. So Rich offers the staff two tickets to see Nora Jones in concert. But that doesn't go over so well with some of the staff, so he takes things up a notch and offers a 4 day trip to a spa. And what happens next… an entire film based on one night of the crew aiming for the prize. Oh and the champ even ups the ante by offering up an additional 10,000 dollars to the winner (loser gets his ribs broken). Hilarity will ensue.

The film revolves around the wait staff of the Salmon, each with their own story about why they are there or why they wanna win the contest. First there's Guy (Erik Stolhanske), he's the wise guy, crack up of the group. Next we have Mia (April Bowlby), who's workin at the Salmon to pay for her Ballerina lessons. She's hot… in more ways than one. Up next is Tara (Cobie Smulders), she's workin her way through Med School. Her skills are much needed at the Salmon in more ways than one. Then we have Donnie who is Chef Dave's twin brother (both roles played hilariously by Paul Soter) Dave is a mean fuck, while Donnie is a goof. We can't forget Connor (Steve Lemme); he used to be an actor on the show CFA: Atlanta, but due to some extreme circumstances, he was only in it for two episodes and now is back to work at the Salmon. Finally we have Nuts (Jay Chandrasekhar) who goes insane if he doesn't take his meds. And when he doesn't, he becomes "Zongo". Each one will give it their all to try and win that grand prize and do whatever it takes to get it. And it's not only the interaction amongst themselves that hilarity will ensue; it's also interaction with the customers. 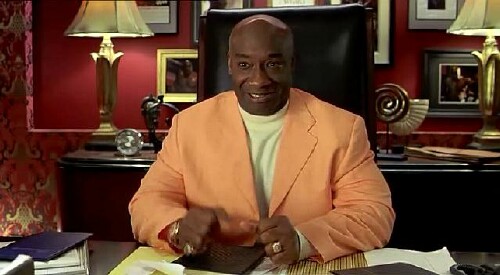 Speaking of customers, we have some prime cameos that pay a visit to the Salmon. First we have Sendhil Ramamurthy, who plays Marlon. He's at the restaurant with his girlfriend Samara (Olivia Dunn) whom he'll ask to marry, but there's a slight kink in his plans. Next we have Vivica A. Fox as Nutella. Actually she makes you wanna hate her more than you wanna laugh at her, but it's still nice to see Vivica on screen (Smokin!!). Next to the stage is Lance Henriksen who plays Dick Lobo. He's the guy that fired Connor, but not for the reasons Connor mentions at the start (Morgan Fairchild also makes an appearance with him and damn her breast… her breast always look unusually smooth). There are other cameos, but watch the film. You'll enjoy it more than me spoilin the entire thing.

Let's get ready to rumble!!!

First and foremost, the story of "The Slammin Salmon" is just spot on perfect. Actually I was expecting something totally gross like "Waiting" (Ryan Reynolds film), but I was pleasantly surprised that BL didn't take the path of disgusting and simply created a great story revolving around this entire night where they need to make all this money. It's very well written, with lots of great jokes and one-liners, plus you'll be quoting this film for years to come. One of my favorite lines came from Guy: I walked out of there with a Bangladeshi hooker. And I banged her deshi all night long. Hilarious! The cast is very well rounded and everyone seems to work together perfectly. There really are no standouts, though some cast members you might laugh harder at than you would others. But overall you're gonna have a great time with the film. 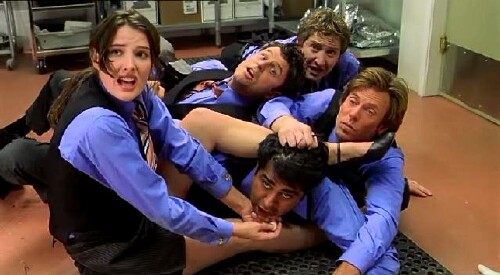 There is some predictability with the jokes. Not a deterrence mind you, but some jokes you see coming a mile away. Case in point is Mia's situation. I won't ruin it but when the scene begins, you know exactly what's gonna happen. Another is Nuts going… well nuts. 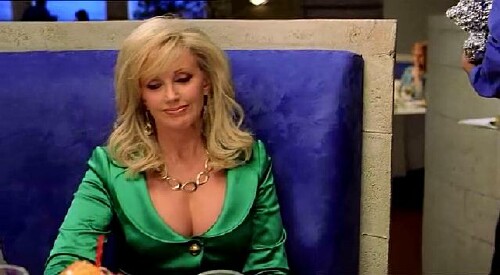 The Slammin Salmon is a definite must see film; it's hilarity at its finest, complete with the perfect cast, a great story, tons of cameos and loads of laughs. And I highly recommend it to one and all. Out of TOV 5 stars, I give The Slammin Salmon 4.5 stars and it's been Valkor tested and TOV Approved! 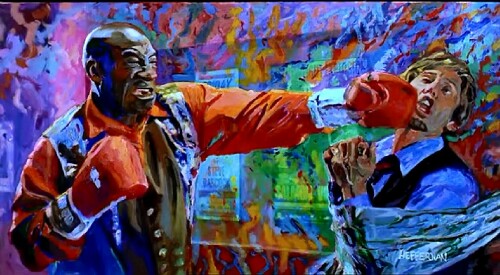