Hey folks, Valkor here, churning out the reviews as if TOV was going out of business... which we're not, actually we're expanding; but more on that at another time. Right now I'll keep the focus on the latest company to step into the Val-Cave - Fujitsu. Makers of printers, scanners, and other PC components; I've long been familiar with the name and what the company produces. And to actually be reviewing one of their products is a dream come true. In the spotlight, is Fujitsu's latest in their lineup of scanners, this one is all about portability. Check it out it's the ScanSnap S1100 Mobile Scanner and it rocketh mine world!

There are plenty of Portable scanners out on the market, though they all serve the same purpose. Some like those from "The Neat Company" (formerly known as Neat Receipt) have the additional software to go along with their hardware, so that you're able to track your receipts, documents and business cards. With the ScanSnap, you'll have about the same functionality, but on a faster scale.

First off the scanner itself looks about the same as most portable scanners on the market – very sleek and slim. The scanner can slip into most carry-ons or messenger bags with ease, though the weight is noticeable (the ScanSnap weighs in at a little more than 12 oz). The differences by comparison to most scanners on the market are its lids – one at the top and one where you feed the paper, which I feel gives it a more "professional" look. At the top you have a scan/stop button and at its side is a USB port. You'll know when the device is on by the scan/stop button which lights up a bright blue. If you close the front lid, the light goes off and the device is inactive. Trust me you'll be doing that a lot!

The ScanSnap scans documents, business cards, images, etc on one side only, fed face up; no double side scanning, though you can scan a double-sided document and keep the two items together, thanks to the software. You simply feed your document and in seconds it's shooting out the other side (trust me, it's fast). The device comes packaged with additional software such as CardMinder for scanning and storing business cards, ScanSnap Organizer for all your scanned items, and also ABBYY FineReader (for PDFs and other docs). 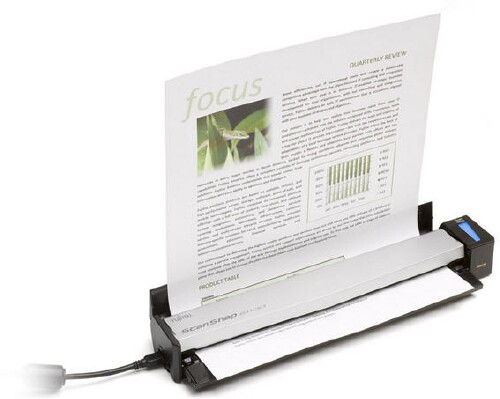 For me the CardMinder is the most important piece of software to come with the device. And with CardMinder you get a simple business card organizer that has a more simplified Outlook 2007 appearance. At the top you have six main tabs – Scanner (for scanning your cards), Recognize (for picking up the text on the cards), Email (links directly with your email program), Website (if there is a website on the card, click this tab and it will take you there), Application (to export all your data to Microsoft Office programs i.e. Outlook, Excel, Word, etc..), and finally Mobile Linkage (for saving your data on a removable drive). For me, and I know most in my field, will find this piece of software most useful, especially after a day of press events and/or conventions and you have a mound of business cards to sort through. Now you can have a very simple and very easy to use scanner in ScanSnap to handle all your business card storage needs and toss that pile when you're done.

Next is the ScanSnap Organize, and is what it is – an organizer for just about every file you have on your computer. Once I designated a folder and opened the software, it showed me everything contained therein (documents, music files, images, etc…). Though it doesn't organize it in any particular manner. Honestly, I have no use for the software and I won't hold that against Fujitsu in my scoring. 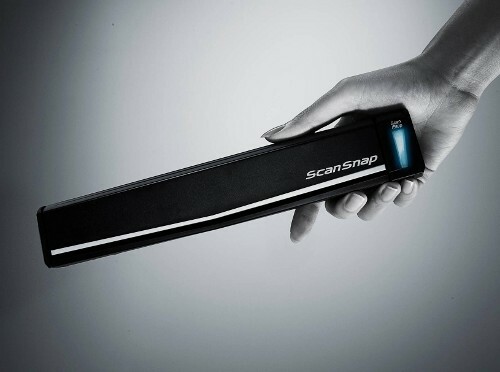 And with that out of the way, let's jump right into the TOV Breakdown!

First and foremost the ScanSnap is very, very fast. As soon as you feed any kind of paper into it, it spits it back out just as quickly. Black and white or color documents are all treated the same. (The Neat scanner, is the only portable scanner I know that's slower when it scans in color). Next is clarity, which the ScanSnap produces amazing images after it finishes scanning, keeping all the details intact. After I scanned my own business card, I used my default image viewer (Vueprint… yes I still use it for its simplicity), you can zoom in and make out the grain with great clarity. The scanner itself is easily portable; I didn't have any issues packing it in one of my larger carry-on bags, though I'd steer clear of any bag that was made for a laptops in the 10" range (I'm preferable to the Corepack Fly). Also it takes up far less space on my desk than my HP All-In-One, which is something I rarely used to begin with; I don't need a huge scanner just to scan images and business cards. Now with the ScanSnap I can put the HP away and have room for other things. The OCR (Optical Character Recognition) is almost always on the money. With CardMinder, about 90 – 95% of the time it nails the info completely and if it misses, it's usually either the fault of the card itself, or if the name of the company is in the logo itself. Plus it does miss a letter here and there, but nothing that can't be instantly fixed. I'd rather do a little editing than an entire job of getting detail off a business card. Another plus is that you can scan back to back, meaning after you scan one item, you can continue scanning until your finished. Afterwards, say with CardMinder, you can let the software take over, crop, organize and so forth. Actually… that's a BIG PLUS! No more scanning one item at a time!

With the CardMinder, there aren't enough item boxes to capture all the details of a business card. Though you have the main items like name, email, and phone, there are no boxes for an address or even a comment box in case you need to make a special note. I find that with some business cards (usually when dealing with PR), you need the comment box to detail who the company is representing. While you can do that in Outlook, it would have been nicer and more convenient to have those added boxes in CardMinder. Also, and this seems like a fix that can be done in a software update, you can't use the scanner with other software. Unless things have changed since I've gotten the scanner, I can't scan documents with another program. What's interesting is that you can scan your documents and after that the ScanSnap software will ask you where you want to store/open the item. So basically the software acts as the middleman and honestly, you don't always need one. Finally the scan/stop light is an almost annoying bright blue. Thankfully you can switch it off by closing the front lid, but when it's open you will notice the device is turned on.

Overall, Fujitsu's ScanSnap S1100 Mobile Scanner has made it so that I not only have a lot more space on my desk, but I've tossed out a bunch of business cards that have been piling up since I don't know when Also. It's scans super fast with superb image quality, making this a must own scanner – even with all the bad, I'd still recommend it. SO if you're looking to invest in a portable scanner, look no further than Fujitsu's S1100! And out of TOV 5 stars, I'm giving the ScanSnap S1100 a 4, and it's been Valkor tested and TOV Approved!