Hey folks, Valkor here. There's no shortage of "end of the world" films in hollywood's movie repertoire; the most recent being 2012, but you can also include such films as "Deep Impact", "Armageddon", or "The Day After Tomorrow". What if you introduce a new scenario into the fold and attempt to make a film that's on the same scale as the aforementioned films, but not exactly on the same scale… and you make it for television? Then you sir, you have my next review for the film "Quantum Apocalypse". Beware of some HUGE spoilers ahead!

The story of Quantum Apocalypse revolves around an anomaly that is introduced when a comet that was seemingly on a path that would whiz by Mars, is suddenly taken off course and smacks into the planet. This kicks up some serious debris and forms some sort of… thing. It is now up to NASA or in this case the USSA to gather their top minds to figure out what the anomaly is and try to stop it. Actually, scratch that, they must first figure out what caused the comet to go astray in the first place, THEN figure out how to stop it from causing earth's imminent devastation. Between the scientists doing their thing and the anomaly plaguing earth, we're introduced to the Marshall family. We have Ben Marshall (Randy Mulkey) Mayor of "Anytown, USA" (that's not the name of the town, we don't really know the name of the town… and honestly… we don't care). We have his brother Rain M… oops I mean Terry (Rhett Giles), who is autistic… like Rain Man. There's even a joke about him being an excellent driver. We have his son Leo (Stuart Lafferty), his wife Lynne (Stephanie Jacobsen) and his daughter Sam (Jenna Craig). What's their role in this picture? They're the heart of the matter, the family you're supposed to care about… and no one else! New York gets sunk by a tsunami, London gets sucked into the anomaly, quakes and tornadoes hit Anytown, hundreds of thousands of lives are lost in a massive California quake even, but the Marshall's take center stage. Well it turns out Terry Marshall knows what's going on and how to stop the anomaly, But he needs to get to Houston. However with the clock ticking and with Earth being ravaged as we speak, can he make it in time to save us all?

Of course he does! But that's not the good of the story. The plot itself is pretty straightforward – giant anomaly is heading for earth and the smartest minds have to stop it. That's all there is and for that I give kudos. I also give kudos to Rhett Giles for playing the only character you actually care about. It makes you wonder why we don't get to see more of him i.e. of him actually figuring things out. What's funny is that he actually explains what's happening AT THE SAME TIME THE SCIENTIST DOES! So did we really need that parallel? Not really. But I enjoyed the character.

Oh man I was dyin to get to this section. First, other than Terry and maybe a few other players the overall acting isn't so hot. Just so you know folks, this is a made for TV movie… and with good reason. It overall sucks. But things really get ridiculous towards the end. How so? Okay, a tornado hits Anytown and whose house survives the devastation? If you guessed "The Marshall's", you'd be absolutely correct! Their entire neighborhood gets wiped, yet their house stays solid. Riiiiiigggghhhhht! Next, so Lynne, Leo, Lindsey (played by Kristen Quintrall), and Sam go to a shelter, but Leo wants to take Lindsey to find her parents. What does Lynne do? She gives Leo, a teenager, a gun. So you know what happens next? If you guessed the writers would come up with a situation where Leo would actually use the gun, you'd be… PARTIALLY correct! They do come up with a scenario, which was beyond pointless, yet Leo never uses the gun (he whips it out), but he himself gets shot. NICE! So you want one more? Say you want one more? I'll give you one more. Leo is shot by none other than Lindsey's jealous ex boyfriend, who then proceeds to beat and possibly rape Lindsey. REALLY!!!? Did we REALLY need that situation? Why couldn't the guy just shoot himself? But Val, how would Lynne know how to find them? I dunno, by Lindsay's incessant screams over her new beau getting shot? Next is there are the scenes that ran a bit too long, which could have been trimmed. There's a lot that goes on with the Marshall's that could have been cut all together, time that could have been useful in developing other, more significant characters. I can't believe the President (played by Peter Jurasik) got so little screen time and did we really need to know there's a rift between him and his wife if there's no time to develop it? What about the hick who flags down Terry and Ben's truck. Her own car breaks down and Ben goes out to help. If you guessed the whole thing was a trap and Ben gets beat the hell up, you'd be absolutely correct! It was such a pointless scene! Finally the overall story carries no weight. And what I mean by this is, you don't really care what's happening on screen nor do they give you reason to. I know this is low budget (and the special effects prove it), but how about we see some serious devastation. At best you see an animated silhouette of some guy getting sucked into the anomaly in Great Britain, why not more people with screams? I could go on but then I'd have nothing left for…

I save this section for the ending, which was a complete cop out. Just so you know, the anomaly hits but Terry makes it to the USSA in time to implement his formula and within TWO MINUTES the scientist were able to extract the info from his computer and shoot off two rockets that would somehow put a stop to the anomaly… IN TWO FUCKING MINUTES. RIIIIGGGGHT! But that's not the ending, nooooo. When the missiles go off, time goes backwards... to the beginning of the film! That's right, it all starts over from the beginning. And it's also revealed that Terry is fully aware of all this. Yea… think about it! Oh and the comet? Doesn't hit Mars, so everything ends all fine and dandy. 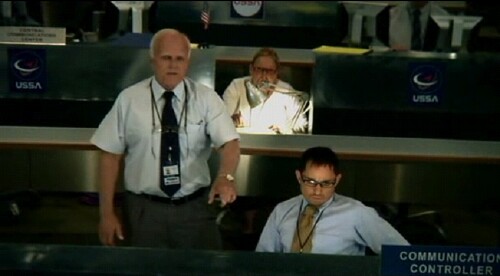 Quantum Apocalypse will air on Feb. 24th, but I say go rent something else instead. It'll be much more rewarding than to have to sit through this film. Though it has a few, and I mean a FEW saving graces, it really isn't worth the time. Out of TOV 5 stars, I give Quantum Apocalypse 1 star.