Hey folks, Valkor here, and the Val-Cave is now open for something wacky. Thanks to the folks at Warner Home Video, we’re able to get our hands on the second volume of the first season of “Steven Spielberg presents: Tiny Toon Adventures”. We didn’t get volume 1, and if you already have itthen definitely complete the set. But if you don’t, it’s ok to jump around because the concept is quite simple. 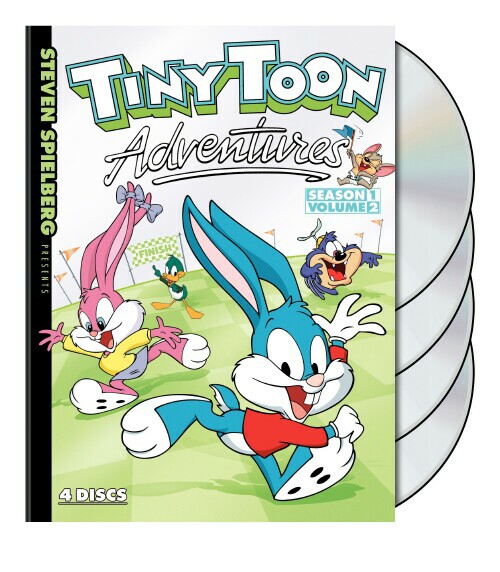 I thought Tiny Toons was simply trying to be a modern take of the original Looney Tune series. However this series takes a different approach because the original stars: Bugs Bunny, Daffy Duck, Elmer Fudd, porky Pig, Yosemite Sam, Pepe Le Pew and almost every character from back then have started a university which teaches the new toonsters how to be Looney Tunes. Almost every new character represents one of the vets: Babs and Buster (Bugs Bunny… Lola didn’t show up till Space Jam if I’m not mistaken), Montana Max (Yosemite Sam) and Plucky Duck (Daffy Duck) to name a few. There are characters that were only seen briefly in the older cartoons such as Gogo the Dodo and the bookworm from the old Sniffles cartoons (which by the way there is a character called Sneezer that looks and talks just like Sniffles). There are hosts of new characters, one in particular, Elmyra, actually represents the Abominable Snowman from an older bugs cartoon, where he really LOVES his pets, and so does Elmyra… sometimes to death. Finally the older vets make an appearance here and there and on this set, the first ep on the first disc you get a handful, spouting out some of their popular catch phrases of old. Tiny Toons bring this all together on a great series where we the viewers learn some things, the characters themselves learn some things, sometimes its a bit of both, or just total hilarity ensues. Tiny Toons doesn’t try to be the NEW Looney Tunes, but it’s a perfect mesh of old meets new coming together to make a great cartoon series. 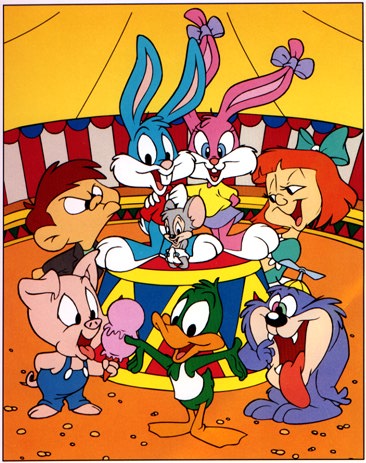 As an added bonus, don’t think just because Speilberg’s name is on the series, doesn’t mean they don’t poke fun of him, because they give him a shot or two.

You get 30 episodes on 4 discs. That alone makes this worth of price of admission. No “4 eps on one disc set”, here you get more than enough to get reacquainted with the new toons. A lot of the eps are a hit, some a miss but they’ll all eventually grow on ya. Some of my personal favorites on the set are “Inside Plucky Duck” a fantastic voyage inside the mind of Plucky, which features the origin of his BatDuck persona, “Who Bopped Bugs Bunny, The “I never get tired because it features They Might Be Giants” Tiny Toons Music Television and Brave Tales of Real Rabbits. Audio/video wise I can’t complain they toons look and sound just as good, if not even better than they did in the 90’s. Video is clean and in full screen ratio of 1:33:1. With the audio you get a couple of flavors such as English Dolby 2.0 and 5.1 surround sound, though you really can’t tell much too much of a difference as the highlight of the discs isn’t how well they sound. However the music video portion is definitely one ep you’ll wanna crank up. 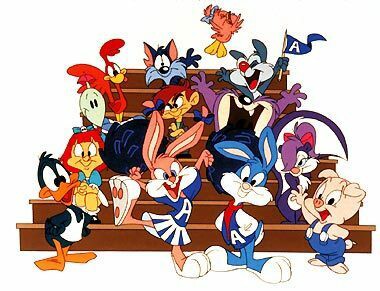 The best part about the Tiny Toon series is that they didn’t try so hard to be exactly like the original Looney Tunes; instead let the newcomers personalities play out while instilling some of the original comedic effects. Tiny Toons is a great series to pick up, because they don’t try to hard to be too preachy and the show is very entertaining that still holds up even today. Out of TOV 5 stars, I gotta give this set, Tiny Toons Season 1 Volume 2 a 5 and it’s been Valkor tested and TOV Approved!